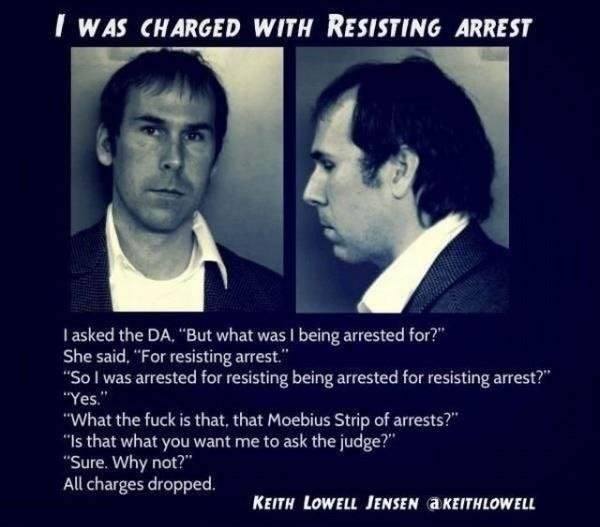 There is no such crime as “resisting arrest” when the supposed arrest is unlawful. This is a fictitious crime dreamed up by law enforcement to accuse a citizen of a crime when they refuse to surrender to the illegal demands of the police.

U.S. courts have ruled on numerous occasions that resisting a false arrest is not merely a citizen’s right, but his duty! In fact, courts have gone so far as to rule that if a law enforcement officer is killed as a result of actions stemming from a citizen’s attempts to defend themselves against a false arrest, it is the fault of the officer, not the citizen.

“When a person, being without fault, is in a place where he has a right to be, is violently assaulted, he may, without retreating, repel by force, and if, in the reasonable exercise of his right of self defense, his assailant is killed, he is justified.” Runyan v. State, 57 Ind. 80; Miller v. State, 74 Ind. 1.

“These principles apply as well to an officer attempting to make an arrest, who abuses his authority and transcends the bounds thereof by the use of unnecessary force and violence, as they do to a private individual who unlawfully uses such force and violence.” Jones v. State, 26 Tex. App. I; Beaverts v. State, 4 Tex. App. 1 75; Skidmore v. State, 43 Tex. 93, 903.

“An illegal arrest is an assault and battery. The person so attempted to be restrained of his liberty has the same right to use force in defending himself as he would in repelling any other assault and battery.” (State v. Robinson, 145 ME. 77, 72 ATL. 260).

Do individuals have the right to come to the aid of another citizens being falsely arrested? You bet they do. As another court case ruled:

“One may come to the aid of another being unlawfully arrested, just as he may where one is being assaulted, molested, raped or kidnapped. Thus it is not an offense to liberate one from the unlawful custody of an officer, even though he may have submitted to such custody, without resistance.” (Adams v. State, 121 Ga. 16, 48 S.E. 910).

And on the issue of actually killing an arresting officer in self defense:

“Citizens may resist unlawful arrest to the point of taking an arresting officer’s life if necessary.” Plummer v. State, 136 Ind. 306. This premise was upheld by the Supreme Court of the United States in the case: John Bad Elk v. U.S., 177 U.S. 529.