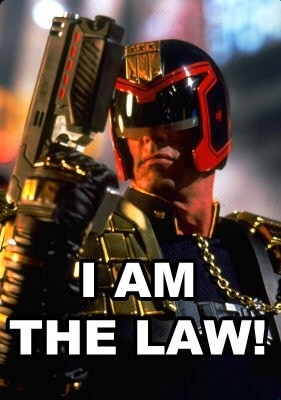 Can anyone tell me what a “law” is? Is it something that is written by legislatures? Is it something written by lawyers? Or, are laws written by God? Or are “laws” even written down at all? Which “law” book would you find the “law of gravity” in? A “law” does not need to be written down to see evidence of it, and the “law” is directly related to your rights. Do you know why it is directly related to your “rights”? The “law” is so simple and so closely related to your “rights” because the “rights” are the law. What are your “rights”? Have you ever told a cop; “I know my rights!” Do you know why saying that you know your rights sounds odd? Because everyone knows their rights inherently if you know the difference between right and wrong.

The constitution isn’t even applicable to you, but we do use it to hold government servants accountable. All the rules are rules to restrict government. And they have tricked us to think that the government is the authority because of the constitution but they are not even enforcing the constitution. Everything is backwards because they are enforcing “rules”, “statutes”, “codes”, and “policy” on people who it does not apply to because they are not employed by government. And like I said before if their policy applies to me, then I need to be getting a regular paycheck because I don’t follow orders for free. Just think, when a public servant pulls you over and writes you a ticket for not wearing a seat belt, he is breaking the law. He is breaking the law because he is forcing or enforcing policy that is only meant for agents of government. Not only that but he is actually extorting and committing piracy on land by pillaging and unjustly enriching himself and his organization by forcing you to pay for not following his rules.

All that a “right” is, is something that is not “wrong”. So your rights are things that you are allowed to do where no one else should “infringe” on those rights, because they are not “wrong”. It is that simple, although you may not be able to see the simplicity of it right away. It really is simple. The “law” is do no harm… and that is pretty much it
.