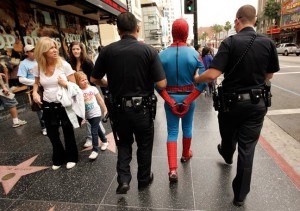 I know that you may have a bit of fear-based conditioning when it comes to cops, but I wanted to talk about something you may not have thought about. Usually when we think of the foundation of the government the United States, most think of the Constitution.

However, I would say that the Declaration of Independence is the document that actually created our country, and it states: “We hold these truths to be self-evident, that all men are created equal, that they are endowed by their Creator with certain unalienable Rights, that among these are Life, Liberty and the pursuit of Happiness.–That to secure these rights, Governments are instituted among Men, deriving their just powers from the consent of the governed, –That whenever any Form of Government becomes destructive of these ends, it is the Right of the People to alter or to abolish it, and to institute new Government, laying its foundation on such principles and organizing its powers in such form, as to them shall seem most likely to effect their Safety and Happiness. Prudence, indeed, will dictate that Governments long established should not be changed for light and transient causes; and accordingly all experience hath shewn, that mankind are more disposed to suffer, while evils are sufferable, than to right themselves by abolishing the forms to which they are accustomed. But when a long train of abuses and usurpations, pursuing invariably the same Object evinces a design to reduce them under absolute Despotism, it is their right, it is their duty, to throw off such Government, and to provide new Guards for their future security”

Now this document is just what it says. It is a declaration, saying we are independent from the King of Great Britain, but it can go for more than just the King of Great Britain, it can be applied in today’s situation. So let’s take a little bit of a closer look at what that preamble actually says.It starts off by saying these truths we hold to be self-evident, seems pretty obvious what that means.

Next, it says all men are created equal. I would assume this doesn’t mean all corporations are created equal, or all governments are created equal … just men. So, since we are all equal. no one is greater than another. And our Creator (we do not need to debate “who” our creator may be right now, but the statement is interesting, and I take it to imply that men are not animals.

We have a consciousness, and we have the ability to determine right from wrong, and make choices) has given us certain unalienable rights. The certain rights we have been given are commonly held that one needs to have to live a fruitful enjoyable life, or things that Man must not be deprived of (especially BY government).

The next part is where we determined that government is necessary, but only to secure the necessary rights that men must not be deprived of. Nothing more. And it says that derive only JUST powers, from the CONSENT of the GOVERNED. This means if you can’t do it, government can’t do it either (in theory anyway). In other words, if you want to go around a charge fee or tax to all your neighbors so that they won’t get hurt, they have to consent or else you can’t do it.If government doesn’t get any extra powers from us, and all of the powers it does get, come from us … then they can’t go around charging the protection fee, either … UNLESS WE CONSENT!

So why are you still consenting?

The police are obviously not given a power from us men that allows them to go around enforcing victimless policy or shooting family pets, or even murdering people without any repercussion. THEY DON’T HAVE POWERS THAT WE HAVEN’T GIVEN THEM, AND THEY HAVE NO MORE POWER THAN EACH ONE OF US HAVE!

You might want to mention this next time you talk to one of them, but do it nicely … because even though they have sworn an oath to uphold a constitution, they are still men, and we are all created equal.

Thanks for reading,
By: Trent Goodbaudy

2 thoughts on “Overcome Your Fear to be Free!”