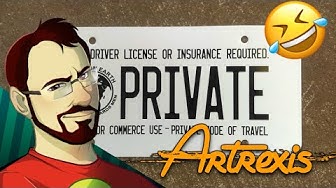 I am so happy that an attorney has decided to give me free “legal” advice, so I am giving him a little bit of my “non-legal” advice back. Let me know what you think in the comment section of my most recent response down at the bottom here, lol.

He also LOVES to steal my intellectual material and then use it to make money. If you look at his channel he uses the likeness of my design on the thumbnails of many of his videos and he admits to making money from my material while claiming “fair use” and inciting his audience and not correcting them when they say things like I deserve a death sentence for not having a “proper” license plate.

He’s got a bunch of reddit/discord trolls so I need to counter-attack so leave a comment on his page. The good news is that they are “textbook disinfo sockpuppet” intelligent, so they go down quick. I am not trying to tell you what to say to him, but try to be kind (I know it can be hard). He can be found here – https://www.youtube.com/watch?v=CM2Vo2U5e9c

I could care less about who or what you want to make fun of on your channel but I was requested to take the video down and I did because there was a kid on there. The video is no longer available to view on my channel at this time and I probably will not put it back up. I didn’t particularly want to take the video down but I did because there was a minor involved and I was requested to remove it. The same one who requested that I take down the video is not someone who I would want at the plaintiff’s table with me as a defendant if you know what I mean, and I told them that I would request for you to also take down the video in which a minor and particularly identifying information of that minor are contained. You do what you want though, they requested that I ask you to take it down. So will you take it down? Now that my duty is done I would rather post a video of my success rather than my friend’s failure so maybe we can break down the next video In which I am pulled over where there are not as many distractions. I plan on continuing to go live frequently and also continuing to travel frequently.

I don’t typically give the cops any documents at a traffic stop because the 4th amendment does not say that the people are to be secure in their person documents and shit except during traffic stops. Even though both terms “people” and “person” are used in that sentence I know that they are not synonymous and why on earth would they put both of them there like that? At any rate, there is no provision in the 4th amendment for traffic stops and you would likely not have so much fun breaking down a “traffic” stop where I am behind the wheel because they are not nearly as entertaining as the one that you chose to use to defame me by proxy with recently.

I thought about it and while the subject of this traffic stop did have his own way of handling the stop it was not necessarily the way that I would have handled it. I feel like people are misdirecting their hostility in my direction and while that is a minor annoyance it is nowhere near the damage that some of those people do to their own credibility when they decide to comment. For instance; I don’t have any “master mason” connections to dismiss a ticket for me not am I a veteran. And while you think that I am evil because I sell books and stickers and stuff then you should really have a problem with Amazon or I hear at buildasign.com they will make me a license plate with a big “FUCK YOU” printed on it so let’s demonize them for their evil as well. Someone on your page said that I deserved the death sentence or life sentence or some shit for something that I didn’t even do so that is some shit that I am going to deliberate on what I am going to do to resolve it but man how long do you think that you can publicly ridicule people before you become ethically improper and begin to give your profession an even worse reputation than it currently has?

Anyway, I am going to leave everything alone with you and I don’t think that I will be taking you up on that offer of the live “debate” because my time is valuable and you have demonstrated a level of bias in your previous content that I believe would interfere with the authenticity of any debate on your platform. Nothing against you, as a matter of fact, I wanted to tell you that while I appreciate your willingness to offer me an opportunity without being muted or censored at a debate with you, the chances of me volunteering to a consensual conversation without the pressure of a debating atmosphere would be more agreeable to me, but I still can’t do that until my uneasiness about your bias is resolved. Anyway, hope you are having a great day, but I have lots of work to do so I am going to get going.

To respond to your initial request, while I will not take down the video, I will compromise by blurring and/or muted any instance where the child speaks or is in camera. I should have that completed over the weekend.

To your next point, there’s a lot the 4th Amendment doesn’t say. And just like any other legal document, the 4th Amendment is subject to interpretation, is it not? What is a “search”? What is a “seizure”? What did the Framers mean by “persons”? These are terms that have to be fleshed out through situations and circumstances where individuals are charged with crimes by the state. Because the context in which someone interacts with the government may change our perspective of what a “search” or “seizure” means under the 4th Amendment. In our system of government, the judiciary is tasked with interpreting the law and how it applies to the factual circumstances presented. In the context of a traffic stop, the Supreme Court has held that the States can require drivers/travelers/whatever you want to call it to identify themselves to a police officer during a lawful traffic stop. Again, what does “lawful” mean? Subject to interpretation as well! The Court did not find that this requirement violated the 4th Amendment.

As to your last point, I fully understand your reservations. I am actively hostile to your views on the law and its applicability. But I would like to believe that I can be fair in any discussion that we may have. I maintain my promise to not actively mute you in the discussion, and to offer you as much time as you need to make your point across. As an example, I gave you moderator status on my channel during the livestream (to the ire of my other moderators and viewers) precisely to ensure that you were not censored or otherwise timed out by my peers. I did that as a show of good faith in my assurances that I will be fair in any discussion. And it need not be in any sort of formal debate setting. In fact, most of my discussions have been informal. When I had a discussion with ArchAngel (another sovereign youtuber), we styled our discussion by asking each other 10 questions regarding the law, and giving each other time to respond and rebut.

Thank you for your time and correspondence.

To respond to your initial paragraph. I may forward your response directly to them so that they can see your terms. I am not at liberty to accept your answer but thank you for it.

In the next paragraph, you rely on a “supreme court” and a 4th amendment to say that I have to follow words written down literally centuries ago when I have never sworn to uphold or defend ANY documents to my knowledge and I would challenge you to show how a very old piece of parchment grants any rights to me that were not already granted to me by my creator also known as nature’s God? You see you get all caught up in these documents and opinions when my God-given rights are NON-NEGOTIABLE and NOT FOR SALE and I CERTAINLY will not be defrauded into exchanging them for state-regulated statues of statutes of codes when those codes are not from my creator and your “Supreme court” is NOT in my jurisdiction and your scam of “representation” is evil because I only need to be present not summoned or conjured or appearing. So while your documents and decisions may very well be interpreted, my unalienable rights are very clear and even self-evident. For example, I have the right to be living (even when you do not correct your audience when they tell me that I need the death sentence for using the next God-given right I am about to notice you of), and I have the fucking right to use a machine to move myself! I do not have the right to hurt others so I am RESPONSIBLE when I am using a machine to move myself. PERIOD. No supreme court can tell me otherwise. No old document can tell me otherwise. And certainly, a cop can tell me otherwise and even try to intimidate me and harass me and coerce me and threaten me to tell me otherwise but I will NEVER SUBMIT TO HIS AUTHORITY BECAUSE IT IS A FALSE AUTHORITY if he is trying to take away my free will when I am not harming others. And if you don’t agree with me I will not force you to agree with me but I will as least respect your ability to do so unlike what you have done to me. So fuck off with your word games and evil black books of spells and advocating taking away of people’s free will. Also, a “democracy” is slavery for the 49% that don’t agree with the majority.

And I am not going to collab with you to make videos but I will gladly continue our conversation via email.

3 thoughts on “My email conversation with an attorney”